The History of Runde Auto Group

Runde Auto Group’s long storied history dates back to the year 1927, which is why many current Runde advertisements read “Runde Auto Group since 1927”.   The origins of the Runde Auto Group are quite humble and can be traced back to the day Alfred Runde founded the East Dubuque Garage in earnest close to a century ago.  Alfred C. Runde (1897-1972) was born into the household of August Runde (1866-1941) and Louisa Manemann Runde (1874-1952).  He was the second oldest of 10 children.  His nine siblings in order from oldest to youngest were Lucy, Robert, Mabel, Earl, Emily, Louis, Carl, Mildred, and Oliver.    The Runde kids grew up in the Township of Hazel Green in Grant County and Alfred’s father and mother farmed for a living in nearby Sinsinawa, WI for nearly 45 years.  Alfred married Irene Cecelia Cullen at St. Mary’s Church in East Dubuque in 1927.  That same year, he also founded the East Dubuque Garage (which would later become Runde Chevrolet). This service garage/dealership was located in downtown East Dubuque on Sinsinawa Avenue.  Irene was a working homemaker who always enjoyed time with her family, discussing politics, a good game of cards from a worthy challenger, and the Chicago Cubs.  In addition to running the dealership/auto service center, Alfred also served as a councilman of East Dubuque as well as president of the East Dubuque Lions Club for a number of years.  He and Irene had 2 daughters named Arlene and Marilyn and two sons named Paul and Will.  Paul, who would eventually take the family business under his wing, was born on August 15th, 1933.

Paul grew up in East Dubuque and graduated from the Loras Academy high school in 1952.  He served the United States in the Korean War from 1954 to 1956 and after returning to the states, he went on to attend the University of Wisconsin-Platteville and in 1960, he graduated with a Bachelor of Arts degree in English, history and education.  Paul was passionate about the car business, the arts, all things related to politics & sports. He was a die-hard fan of the White Sox and the University of Illinois college football team; he always enjoyed watching his favorite teams together with his brother Will.

Paul married Shirley Krohn in 1958 and they eventually had six children: five sons and one daughter.

Runde became co-owners of the family business.  Looking back in retrospect about that time, Paul described Runde Chevrolet as a “four-man operation” and added, “You did everything from selling cars to servicing to sweeping the floors.”  Then in 1975, they built a brand new dealership lot just up the hill from downtown East Dubuque on Highway 35N.   It was at that point that Paul and Shirley changed the business name to Runde Chevrolet.  The new store was larger with much more lot space.  This, in turn, allowed the Runde’s to increase the size of their inventory and service many more vehicles each day. 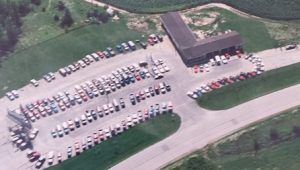 In 1991, the Runde dealership was a rapidly growing company and they opened the Runde PreDriven store just a mile up the hill from Runde Chevrolet. By 1996, this used vehicle store had expanded their lot size as well as their used car & truck inventory and continued growing by leaps and bounds as news of their straightforward sales approach and no-haggle pricing spread quickly by word of mouth from satisfied customers throughout the Tri-State region

Paul owned and operated the dealership until his retirement in 1999.  At that point, his 5 sons (Tim, Ron, Greg, Mike and Jeff) collectively purchased the ownership rights of the dealership from their father.

The following year, they undertook the first of three major renovations to the Runde Chevrolet Dealership Showroom.  Since that time Runde Chevrolet has expanded.  In 2001, they purchased a Buick dealership in Cuba City (formerly Dellabella Motors).  Right around that same time, they became early adopters of the internet and began advertising their inventory online on Autotrader and their own website www.RundeAutoGroup.com.

In 2005, they purchased a Ford-Chrysler-Dodge-Jeep-Ram truck dealership right on Main Street on the west side of Manchester, Iowa.  This dealership has become a staple of the Manchester and Delaware County community over the years and is currently situated right across from the Walmart at the corner of Hwy 13 and Main Street.  This Runde store is often referred to as Runde Auto Group of Manchester.

In December of 2012 they acquired Platteville’s Mound View Motors dealership, and will merged its operations with their Cuba City Buick dealership. This new dealership was renamed Runde Chevrolet Buick GMC of Platteville.

In 2015, the Platteville location underwent a major renovation project for their showroom, service center, and physical car lot.   Since that time that dealership has been selling many new Chevrolet cars to residents of the Dubuque as well as to folks from the Northern Illinois and Southwestern Wisconsin areas.  Runde Auto Group of Platteville is situated at 885 E. Business Highway 151 right in the heart of the Platteville business district and is easily accessible for all customers whether they’re coming from Dodgeville, Lancaster or Galena.

The main headquaters of Runde Auto Group’s 4 dealership is in East Dubuque at 151 Hwy 35N in the hills just across the river from Dubuque.  In 2017, this store welcomed aboard it’s first full-time 4th generation employee from the Runde Family when Jacob Puls, the great-grandson of Alfred Runde graduated from Augustana College and joined the Runde Chevrolet sales staff.  Jacob is just the first of many who will follow as there will undoubtedly be many more generations for Runde’s who will carry on the family legacy. And the future Runde’s will continue to grow the dealership and foster relationships with customers both near and far.